The pianists are the winners of last year’s seventh Chopin Piano Competition for Children and Teenagers in Egypt, the main prizes of which include a visit to Poland.

The musicians, all aged 16 to 19, are Shadh Magdy, Andrew Milad, Mahmoud El-Batran and Mostafa Hassan.

During their week-long stay in the country (between August 7 and 13), the musicians explore many places that commemorate Chopin’s years in Poland and his music.

The rich program so far has included a Chopin concert in Warsaw’s Royal Park on the first day of their visit, followed by a stroll through the city’s Old Town, a venue which, among many historical attractions, offers musical benches that play Chopin’s compositions, and a café that, according to the story, was frequented by the composer himself.

The old town was also the site of their participation in the “game of the city” on the second day of their visit. During the game, participants were given a card and cards with questions related to the composer, and were asked to complete many tasks while walking through the streets.

On the third day – Tuesday – the young musicians visited the Chopin University of Music where they had the opportunity to meet the professors of the famous institution. While at university, the Egyptian musicians gave a short impromptu grand piano performance. The visit to the university was followed by a guided tour of the Chopin Museum. 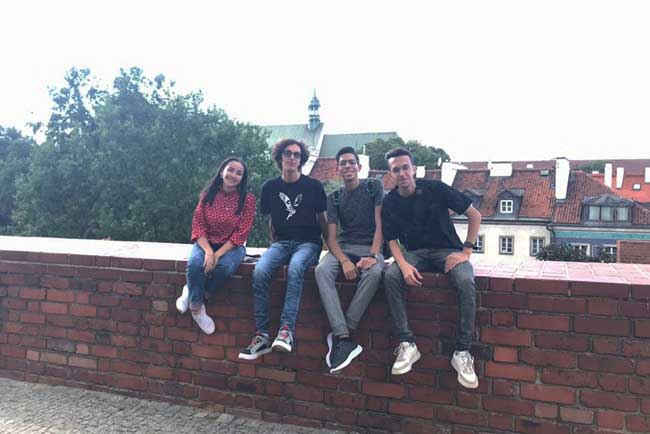 Activities related to Chopin are intertwined with many other interesting visits that allow young artists to learn about the history of Poland and its culture. During the stay in Warsaw, the musicians also visited the Museum of the Uprising, which presents the history of the great operation of the Second World War carried out by the Polish underground resistance to liberate Warsaw from the German occupation which began at the beginning of August 1944.

This year, the trip to Poland is enriched with a visit to the northern cities of Gdansk, Sopot and Gdynia. Although this part of the program is not related to Chopin, these historic places are full of architectural gems that carry the rich history of northern Poland. The cities are also known to be home to many musical attractions, including internationally renowned music festivals.

The group will return to Warsaw on August 11, where they will spend their graduation days visiting important museums and attending music concerts. This will be complemented by a visit to Żelazowa Wola, Chopin’s home, located 46 kilometers west of Warsaw.

The group will return to Cairo on August 13.

The Chopin Piano Competition for Children and Youth in Egypt was initiated by the Egyptian Youth Music Association by Fawzy El-Shamy, the former Dean of the Cairo Conservatory, who has contributed to many musical initiatives on the Egyptian music scene.

The competition is organized in collaboration with the Polish Embassy in Cairo.

The first edition of the competition was held in 2010, but its 2011 edition was canceled for political reasons. It returned in 2012 and was held annually until 2018 when it was again suspended until 2021.

In its seventh edition, the jury of the competition included Mariola Cieniawa-Puchala (Poland), Ahmed El-Saedi (Egypt) and Helgeheide Schmidt (Germany).

The 2021 edition was organized by the European Educational and Cultural Foundation Zielona Góra in cooperation with Rahn Education Schulen Kairo, Maestro Ahmed El Saedy and the Polish Embassy in Cairo.

Yonder is moving its three-day music, arts and camping festival to the Scenic Rim for 2022