The Friday opening of the Rochester International Jazz Festival is this week’s top event. But examine the nooks and crannies of this week’s listings and you’ll discover a comedian or two. You can find the full CITY schedule here.

Make your own pasta

If you’ve only ever boiled dried pasta in a can, mama mia, you have to try the fresh ones. Better yet: learn how to make your own. It’s easier than you think, and from 6:30 p.m. to 8:30 p.m. you can take a Rochester Brainery class at Eat Me Ice Cream with Christin Ortiz, who has plenty of experience in local cuisines with a particular focus on ice cream. Italian and Hispanic. kitchen. Ortiz will teach the basics in a fun and accessible way, and demonstrate different techniques. Participants can eat during class or take their creations home (just bring a take-out container). You will also have marinara sauce and recipes to go. Suitable for ages 18 and over. The cost is $34.

Peter Holsapple has been in the music business for over 50 years – notably, in the 1980s, he played keyboards and guitar with power-pop band The dBs. Today, Holsapple performs as an auxiliary musician with Hootie and the Blowfish. His set at The Bop Shop will be a one-man performance, featuring old classics and intimate stories from a life in rock and roll. Admission is $20. 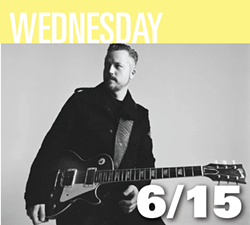 There’s no wasted space on this stage: Jason Isbell’s emotionally powerful lyrics, Crow’s nine Grammys and Waxahatchee, which are indie songwriter Katie Crutchfield’s songs with a backing band. Isbell’s most recent album, “Georgia Blue”, is a collection of songs by Georgian artists – REM, The Black Crowes and The Allman Brothers – performed by Isbell and his band, originally from Georgia. 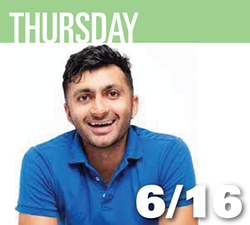 Hailed as “Saturday Night Live’s most intriguing new recruit” by Vanity Fair in 2017, Nimesh Patel, the show’s first Indian-American writer, wrote jokes for Chris Rock, Awkwafina and Congressional Correspondents’ Dinners and the White House, and currently writes for NBC’s “A Little Late With Lilly Singh.” A regular at New York’s famed Comedy Cellar, this comic has probably made you laugh before and you didn’t know it. If you catch it, you won’t forget it. Patel does five sets over three days from June 16-18. Tickets cost between $15 and $20.

Nine days in and around the East End District

The first notes sound at 4.15pm, with the School of the Arts Jazz Band playing on the closed Gibbs Street, renamed Jazz Street for the nine days of the festival. The big headlining shows each night will be free events on Plot 5, off E. Main Street. Friday’s show is trumpeter Chris Botti, who takes the stage at 9 p.m., following performances by The Dave Rivello Ensemble and CMD (local jazzmen Casey Filiaci, Mark Terranova and Dave Cohen). Parcel 5 is one of 13 venues, some offering free shows, others paying admission or access via a Club Pass.

Although I haven’t attended any of these functions, I have seen pictures, and let me tell you, the name fits. It’s not a conference, or a meet, or even a festival – it’s a carnival, filled with weed, weed-adjacent items, and other totally unrelated stuff like people in full costume , gymnasts and general antics. The expression “Whoop whoop” comes to mind. You may need to go check it out yourself. Smoke them if you have them.

For Juneteenth and the last day of the “Joshua Rashaad McFadden: I Believe I’ll Run On” exhibit, the George Eastman Museum is offering free admission from 10 a.m. to 5 p.m. screens at 1 p.m., followed by “Amazing Grace,” with Sydney Pollack and Alan Elliott, at 3:30 p.m.