“WHO? George Harrison?” Mahadeb Pramanik points to the frayed bench, “Oh he was just sitting there!” Pramanik is a craftsman at Hemen & Co — “Manufacturer and exporter: sitar, sarod, harmonium, tanpura, esraj, etc. ‘the silent Beatle’ has passed. ”
united obak ! He was surprised! But Hemenbabu ignored him and continued to work. At one point he told George Harrison,
‘Arrey chhaya porchhe, shorey boshun’ (“Step aside, you’re blocking the light.”). 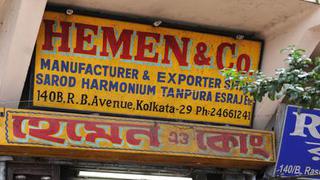 Hemenbabu is the late Hemendra Chandra Sen, who settled on leafy Rashbehari Avenue (it was then called the Main Sewer Road) just before independence. One of the busiest roads in South Kolkata, this beautiful avenue with its clattering trams is dotted with restaurants, florists, traditional sari shops and swanky new malls. Here, in a small space overrun with half-finished instruments, strange tools and framed photos of the who’s who of Hindustani music, Hemen & Co has been creating and repairing instruments for musicians around the world since 1945. Ravi Shankar at Ali Akbar Khan, they all came to Hemen.

Apparently, one day when teenage Hemendra’s sitar broke, he couldn’t afford to have it professionally repaired, so he did it himself. His guru, Baba Allauddin Khan, was so impressed with Hemen’s skills that he made him the de facto repairer of all his instruments and those of his band Maihar. Soon ‘Hemen & Co’ was born and over the years it has acquired an almost mythical reputation.

Ustad Hafiz Ali Khan of the Pashtuni Bangash gharana, who was a customer, watches from the top of the peeling wall. His son and grandsons, Ustad Amjad Ali Khan and Amaan and Ayaan Ali Khan, have 28 sarods customized by Hemen and his sons, Ratan and Tapan, who run the establishment today (there is a second newer store on the road). “The first baba sarod ever made,” says Tapan Sen, crouching on the ground as he tinkers with an unfinished sarod, “belongs to Ustad Amjad Ali Khan. His name is Ganga – all his sarods are named after rivers. Curiously, it broke shortly after Baba’s death. [in 2010]. We had to fix it for Ustadji.

Hemen’s sarods and sitars are made from segun (teak) or toon (red cedar). With deforestation and climate change, high-quality wood is becoming harder to find, but Hemenbabu had the foresight to stock teak from Burma and toon from the forests of Assam. “These are more valuable than gold,” says Tapan. “When they were cut, they bled a thick red juice.” Much of the wood left over after an instrument is made – the best of them are carved into huge single blocks – is given as firewood to the
chaiwallahs outside.

Calcutta had a vibrant culture of sitar and sarod making for much of the 20th century. Wajid Ali Shah settled there with his suite of Lucknowi sarodiyas in the 19th century, and by the 1930s instrumental music was flourishing. In 1940, Kanailal & Sons, specializing in rudraveena, was created. Further on Rashbehari, Hiren Roy opened his famous sitar shop around 1942. Makhanlal & Sons were already famous when Kishori Mohan Naskar started working for them. In 1941, he founded Naskar’s in Bhowanipore. All of these are now defunct, with Hemen & Co being one of the few traditional bespoke instrument makers left in India. They made the dilruba, a variation of the esraj, memorably used in “Within You Without You” on Sgt. Pepper’s Lonely Hearts Club band. And the sitar-banjo (a sitar with a banjo head, made from the skin of sacrificed goats at the Kalighat temple, which they also use for the sarod) for the Maihar Band; the lyrically named chandrasarangi from Ali Akbar College of Music in San Rafael; and the mohan veena for its creator, Pt. Radhika Mohan Maitra. Even their closest competitors – Oriental Musikraft, established in 1987 by one of Hemenbabu’s former apprentices, Dulal Kanji – consider them the best.

“But the pandemic has affected business as concerts have stopped. The decline actually started with demonetization,” says Tapan. “It hasn’t been the same since.”

“The instruments made by Hemenbabu have acquired great value,” says musician Pramantha Tagore. Mahadeb Pramanik remembers the fear in which the musicians held his late employer. “At concerts, Ustadji used to say, ‘I am Ali Akbar because of this instrument. You should garland the man who made it’.

Reading plan to replace the music store with a bowling alley