OK, so we’re a little heavy on the music lists this week. And that’s without even mentioning Buddy Guy Friday and Gordon Lightfoot Saturday, both at the Kodak Center. And local heroes Joywave, also Friday and Saturday, at Anthology. As always, it’s a good idea to check each location’s COVID policy. You can find the full CITY schedule here.

To receive the weekly planner in your inbox, subscribe here.

The three-day Rochester Classical Guitar Festival culminates with this Swiss star who has performed with orchestras such as the Budapest Symphony Orchestra, the Lausanne Chamber Orchestra and the Orchestra Chamber of Versoix. Smith also won the 2019 Guitar Foundation of America International Concert Artist Competition. Opening the show is Eastman Community Music School’s Guitar Adventure II class. Tickets are $20 and $15 for students.

You may remember this wonderful group of Ukrainian musicians at the 2017 Rochester International Jazz Festival. An unexpected theatrical quartet in traditional black and red clothing, Dakha Brakha is a bearded bald man and three women wearing black fur hats from 1 ½ feet high. The music is surprisingly powerful, percussion-driven folk music, performed at breakneck speed, with a smattering of accordions, ukulele, cello and a few native instruments, and the specter angel moans of women woven everywhere. The group’s piece simulating the sounds of birds was one of the most memorable moments of the festival.

Three of these musicians attended the Eastman School of Music. The “Plus One” is a reference to how the band will slowly add an additional player as the show evolves. They will perform works by Mendelssohn, Fauré and a piece by the quartet’s pianist, Hwaen Ch’uqi. Catch the free performance at the school or listen to the live stream on WXXI-FM (91.5), WXXY-FM (90.3) or online at classical915.org. 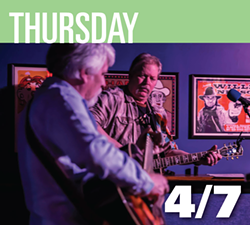 Jeff Riales and Jed Curran, as frontmen of the Flipsiders, led one of the coolest open mic parties in Rochester. The lively event started in 2005 and lasted until Flipside Bar & Grill closed in 2013. But many old characters will be back for this reunion show.

Smiley, who has a nationally broadcast radio show, is perhaps best known for pulling off wacky phone calls. Holcomb, who calls himself “The Ghetto Dr. Phil,” has a Tuesday night show on YouTube.

Dead to the Core: An Acoustic Celebration of the Grateful Dead
7:30 p.m.
Christian Reformed Church of Rochester

A collection of singer-songwriters celebrate The Dead as The Dead might: not note-for-note reproductions, but with the musicians improvising to Dead music. This show stars Jefferson Hamer, Ryan Fitzsimmons and Laurence Scudder, and Jeffrey Pepper Rodgers with Wendy Ramsay.

Forty-five years after the release of one of the band’s finest albums, “Waiting For Columbus,” this tour is all about playing it in its entirety, cover to cover. Opening is an English blues guitarist, Jack Broadbent, who was a favorite at the Rochester International Jazz Festival a few years ago.

Jeff Spevak is an art writer for WXXI and CITY, and he curates events for our weekly planner. He can be contacted at [email protected]

The AU Review – Discover the best in music, arts, travel, film and lifestyle